Year 9 students worked exceptionally well, learning how to put up a tent as part of their Duke of Edinburgh Award! @DofE https://t.co/cF38BDWEni

This week in Science: while studying the topic of light Year 7 had the amazing opportunity to dissect eyes which has helped them to understand their structure and how we see. https://t.co/wdIYPrrTYj

Year 8 & 9 learnt how to make short bread biscuits last week. This activity proved to be a huge challenge for students. All of this was achieved in a one hour lesson! Keep up the high motivation and amazing work. https://t.co/92IVGFpyo3

Year Year 7 Tech Club started this week, Abisayan and Ashvath were learning how to change the colours of the lights in the Drama Studio. Come and join in on Monday lunch time. https://t.co/Bt1t4S44CY

Year 9 students have been studying the art period, Dadaism, and have produced some fantastic personal responses to the pandemic. https://t.co/CGxlMp4Hq5

Students are off to a flying start in Food & Nutrition! Students will complete 6 different practical cooking tasks. These will incorporate a range of different preparation and cooking techniques, so that they can independently make meals for themselves and others in their homes. https://t.co/HJ9uxLfgi6

We were delighted to have the @MayorOfMerton visit us today to award our school a certificate for the work we have done during the Covid-19 pandemic. https://t.co/WFnkzX8R3w

Year 7 Band sounding great this week. The Music department has been very busy with all our ensembles and choirs starting up again, and 68 students continuing with their instrumental lessons! https://t.co/CBITQJOzxI

It was all getting a bit competitive in the Upper Academy Players! https://t.co/yQIGm9cvpQ

We are incredibly proud of Dhruv (7 Morris) who is the first student in the school to receive 6 Ambassador Signatures on our new Community Cards. He has shown exemplary manners around the academy. Well done Dhruv! https://t.co/62pxrfBRuN

Congratulations to the following Year 9s for achieving a certificate in this year’s UKMT Intermediate Maths Challenge: Kanay, Ellie, Yahya, Patryk, Berukh, Jesse, Aaron & Robert! We wish Robert good luck for the 19 March as he participates in UKMT Grey Kangaroo follow-on round!

Twitter WallHarris Academies
All Academies in our Federation aim to transform the lives of the students they serve by bringing about rapid improvement in examination results, personal development and aspiration. 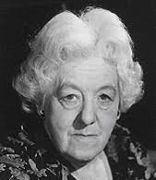 This house is named after Dame Margaret Taylor Rutherford, DBE, an English character actress, who first came to prominence following World War II in the film adaptations of Noël Coward's Blithe Spirit, and Oscar Wilde's The Importance of Being Earnest. Margaret Rutherford's early life was overshadowed by tragedy. Her father was William Rutherford Benn, a journalist and poet. One month after his marriage to Florence, Benn suffered a nervous breakdown and murdered his father.  When she was twelve, Rutherford’s mother took her own life. Despite these huge challenges, Margaret Rutherford was determined to be successful.  She moved to Wimbledon, and was steadfast in her approach to all aspects of school life.  She became a teacher, and, later, moved into acting where she became very successful.